In the third of a series of law-related TED Talks, 36 students from Urban Action Academy were able to engage in a rich discussion about the career paths followed by 6 women who entered the law field and found both professional and personal success. These presenters are part of the legal team for the New York City Department of Education, which represents the school system and its 1.2 million children.

During the TED Talk, students were provided with reflection sheets and gave high praise to the presenters. Some important take-aways from student participants include:


In a message to Principal Steve Dorcely, Ms. Jordana Shenkman, Esq. said the following about the event:

I am beyond thrilled to see that the students were really listening and felt inspired and motivated by the stories and words of advice from the women before them--all very accomplished professionals at the DOE. That's exactly what we wanted to accomplish!!

Some pictures from the event are shown below: 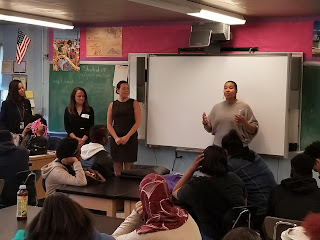 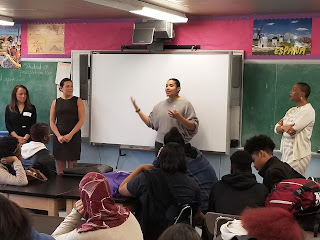 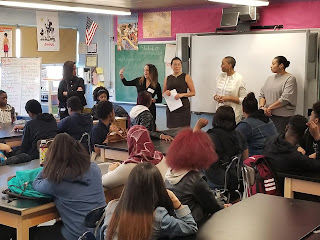 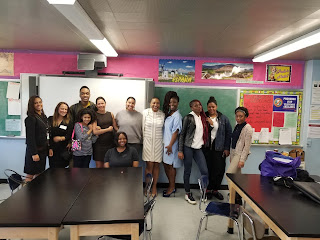 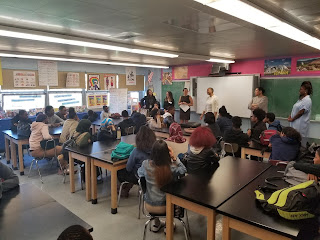 Popular posts from this blog

Students learned about some of the rigors of High School, some tips for success, and what they will need to get to graduation in 2022. Following that, Mr. Nagy, Mr. Mento, and upperclassmen volunteers took the new freshmen on a tour of the building and field. Everyone left with an Urban Action Academy shirt and other give-aways.

Thank you to those students and parents who joined us. Thank you also to the staff who came out to show their support to the incoming class.

September 22, 2018
On Saturday, September 22, Principal Iris Garcia, Assistant Principal Ronda Razak, teacher Brian Nagy, and students Samiyah Brown and Chrislin Bradshaw proudly represented Urban Action Academy at the High School Fair held at John Dewey High School. The day was a success, with middle school students getting to meet staff and students from the school we hope they will call home starting next year. Parents and next year's freshman class got to learn about programs, classes, and supports available for UAA students.

Many schools from around Brooklyn came out to Dewey's gymnasiums on this beautiful Saturday, including Canarsie's own IAM and HSMP.

The next High School Fair will be held at Brooklyn Technical High School on October 13 from 10:00-3:00. From the DOE events page: "At all of the fairs, we'll have workshops on high school admissions at 10:15am and 12:30pm. These cover the same material as the summer workshops from July 2018. All of the fairs will also have a…
Post a Comment
Read more

September 28, 2018
On Wednesday, September 27, Urban Action Academy joined the rest of Canarsie Educational Campus schools to welcome many colleges. Students had the opportunity to speak to representatives from many colleges, as well as military recruiters, and the FDNY. They were able to ask questions about undergraduate programs and campus life and walk away with more information. Many campuses asked students to sign up to be sent additional information. This was the first year the the fair was held during school hours and participation was significantly higher than after-hours fairs of the past.

The students were enthusiastic and energized participants.